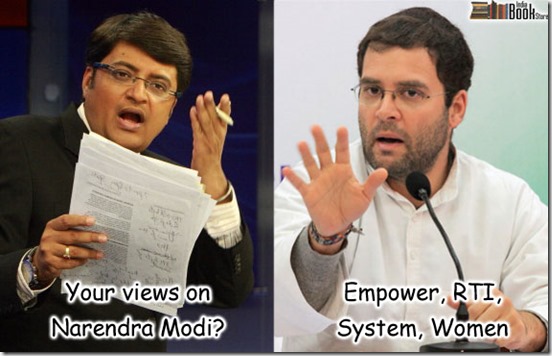 I am a little late to the party! Finally got around to listening to the hilarious interview, and was immediately itching to run some analytics on the transcripts. For the sake of simplicity (that’s the job of an engineer right!), lets call Arnab Goswami as “Argo” and Rahul Gandhi as “Raga” (PS: the nick names sound cooler than real pplz ;))

5 interesting stats that the analysis brought out :

Raga’s dictionary of words (in order of their usage) : System, People, Country, Congress, RTI, Process, Empower, Gujarat, Youngsters, and Women.
Jairam Ramesh and Priyanka Gandhi, who were prompting Raga during the interview, seem to have done a good job. And so has Raga, by memorizing all the buzzwords, a little TOO well, perhaps!

The country would have been more content learning some actual facts about their prospective PM candidate’s future plans. Nonetheless, speaking something is better than not speaking at all, if you know what I mean.

If you liked it so far, you would love reading this too –