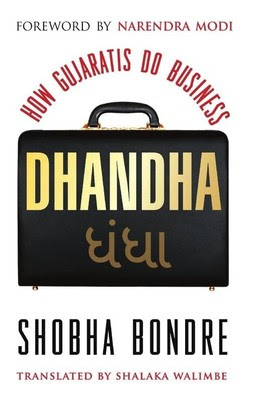 Congratulations winners !! Please email us your shipping address at feedback@indiabookstore.net. We will be mailing you a copy of Dhandha by Shobha Bondre

3 of Asia's top self-made men are from Gujarat. Nearly 35% of India's stock market wealth belongs to Gujaratis. Needless to say, the state and its denizens are among the most prosperous in the country. Which brings us to our contest question....

"What, in your opinion, is the secret behind the entrepreneurial spirit that nearly all Gujaratis seem to have?"

5 wittiest answers will win a copy of Dhandha by Shobha Bondre.

The total points of your entry will be the sum of all the three points above. We will give prizes to the top 5 entries by total points.

Dhandha, which means business, is an oft-repeated term in India. However, the word does not gain its full meaning in any other community as it does in the Gujarati community.
The book is a collection of the life accounts of few successful Gujarati businessmen across the globe. One of the stories in Dhandha: How Gujaratis Do Business is that of the Gujarati life insurance agent, Jaydev Patel, who works with New York Life Insurance. He has sold policies worth 2.5 billion dollars. Another story is that of Mr. Bhimjibhai Patel, one of the biggest diamond merchants of the country and the ambitious founder of the Diamond Nagar near Surat. One of the stories is about Mohanbhai Patel, a leading maker of collapsible Aluminium tubes and the former sheriff of the city of Mumbai.
The book also includes an account of the life of Dalpatbhai Patel, a hotelier who subsequently became the mayor of Mansfield County. The book also includes a story based on the life of Hersha and Hasu Shah, who own over a 100 hotels in the United States.
Dhandha: How Gujaratis Do Business covers Gujaratis across the globe and identifies the common traits of ambition, knack for business and their ability to work hard that makes them successful businessmen.

What, in your opinion, is the secret behind the entrepreneurial spirit that nearly all Gujaratis seem to have?
(Leave your comment below)