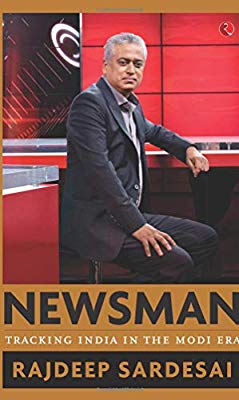 Newsman is an anthology of hand-picked articles which Rajdeep Sardesai has written in the Modi era. Followers of the author might be disappointed at not finding anything new (except the postscript at the end of each article) to discuss about but newcomers to Indian politics will find this a nice and breezy read to get themselves update before the 2019 general elections.

Despite its pretensions to be a ready reckoner to Indian polity, the book isn’t unbiased and therein lies its major faults.

Dilip Sardesai wasn’t the most charismatic (or enigmatic) Indian batsman ever but his limpet-like abilities made him a central figure in two of India’s earliest overseas victories – in West Indies and England.

Fast forward four and half decades and you will find his son Rajdeep occupying a central position in the boiling pot of India’s political journalism – even if his views aren’t exactly centrist.

‘Newsman: Tracking India in the Modi Era’ is Rajdeep’s third book after ‘2014: The Election That Changed India’ and ‘Democracy’s XI:  The Great Indian Cricket Story’. Newsman embodies the spirit of his first book but, whereas the former came out a year after the 2014 general elections, he goes one better with Newsman by launching it one year before the general elections.

The book is an anthology of what Rajdeep would consider the best (and most relevant) articles he has written over the last 4 years. It divides itself into five distinct themes each of which contains an assortment of articles which would broadly fit in the same.

The first of them is all about the man himself – Narendra Modi. Starting with what Rajdeep puts as “right man, right place, right time”, this section goes on to explore his political strategies and his famed rivalry with Sonia Gandhi. TINA makes a token representation and so does DeMo. The final touches are about his policies regarding Pakistan and corruption (as separate entities).

The second section has been classified as the Indian Political League. This collection sweeps widely across the regional politics and political parties of the major states of India and the ever-looming threat of the BJP over them.

The section also “introduces” us to Rahul Gandhi and has an interesting commentary on how the saffron party might have moved to Chanakya Neeti from Raj Dharma.

The next is probably the closest to the author’s heart – he takes up the gauntlet for the so-labelled “anti-nationals” of the country. The JNU protestors make their entry here as does Rohith Vemula and even Asaduddin Owaisi (to be fair to the author, he doesn’t bat for the latter – pun intended).

Cow politics as a part of the larger plan that is the RSS’ Hindu Rashtra and the Kashmir issue is touched upon. There is even a mention of Bollywood’s role in politics.

The penultimate section is a somewhat sarcastic take on Modi’s “New India” strategy. Crony capitalism, land-based corruption and Vyapam headline this section with Lalit Modi and his IPL making an appearance (in separate articles).

It ends with what I consider is one of the best articles in this anthology – the author’s take of the shadow of political partisanship on Nehru’s and Ambedkar’s legacies.

Last but not the least is Rajdeep’s home turf – the fourth estate. An obvious commentary on state-sponsored media is expected and duly given. Gauri Lankesh and Burhan Wani are given their contrasting dues as well.

The “tyranny of distance” which splits India into three parts – the North, the South and the North East – in the eyes, ears and pens of the media is brought up not just once but twice.

The dessert is served in the form of Rajdeep’s interpretation of the Rabindranath Tagore poem “Where the mind is without fear and the head is held high”. He takes the central idea of this much-loved piece of literature and puts in his own content in the context of the India of 2018.

As someone who considers himself politically neutral but politically informed, I read or watch almost anything I can lay my hands – or should I say eyes – upon which concerns the same. I’m sure a lot of my inputs involve the so-called “fake news” because my content sources are primarily Facebook and YouTube. Considering that, Newsman is a fresh breath of air because it reads better, and it reasons better – obviously because it has been written by one of the best (if I may use hyperbole) journalists in the country. This, of course, does not mean that it is without faults.

One of my friends who has read Rajdeep’s first book calls it a “ready reckoner for Indian politics”. I might have taken his words at face value if he did not profess his prominent support for the AAM Aadmi party. Similarly, while Newsman’s opinions are much more substantiated than the likes of an OpIndia or a SwarajyaMag (Vivek Agnihotri’s articles are more interesting though – I would love to know what he smokes up), it is not unbiased.

If Rajdeep Sir were to be reading my review, he might accuse me of calling him leftist (or left leaning at the very least). While that might not be entirely true, I do realize that the space occupied by centrists in the Indian political scenario is shrinking and, to have an opinion, you need to take a side. Not that I have a problem with that as what comes out of it is genuine and substantiated with proof as is the case with Newsman. The problem is when you pitch something like this as a ready reckoner to Indian politics to first-timers.

But, then again, all that boils down to perception. I’m pretty sure Swami Vivekananda did not try to become what he became because he foresaw himself as a beacon of Hindutva in post modern India. On the surface of it, Newsman also doesn’t have any such ambitions Even then, there are a few giveaways that it is not so straightforward.

For starters, the articles aren’t in chronological order as you would expect from something like this. that doesn’t happen here. The non-linear timeline of the articles serves a larger purpose in defining a general sense of linearity to the overall narrative.

The strongest argument for this structure is that the articles are clustered into broader themes and hence proved. Point taken but even then, a chronological timeline could have been followed within each them. There is also no point of a postscript at the end of each article (which is the only “fresh” content in the piece apart from the introduction and the poem which serves the role of an epilogue) which poses itself as an updated commentary on the article but plays the role of a connective to the next article.

West Indies 1971 was a last chance saloon for Dilip Sardesai – he rode the bucking bronco with élan and came out of the ordeal with an enhanced reputation.  He would walk blindfolded into today’s India Test team which is not able to match the intent it speaks about off the ground on it with their batting performances.

India’s top order batsmen are in two minds about what to leave and what to play at against the swinging Dukes ball – India’s journalists are caught in a similar quagmire in a political melting pot swirling with crony capitalism, fake propaganda, gung-ho jingoism and radical uprisings. It’s time for a Rajdeep Sardesai or a Ravish Kumar to put their best foot forward and deliver news the way it should – unbiased and untainted.

Postscript: A lot of Newsmanis about postscripts which is why I felt I should end on a “meta” note. Most of the readers of this review would ask me why I would rate a book 3.5 stars out of 5 when I am critical of it. Quite a few of the propaganda movies made in Hitler’s Nazi regime would hold their own if considered as a work of art. That does not mean we should not be critical of them in a socio-political context.

I am not accusing Rajdeep of spreading propaganda – in fact far from it. He doesn’t take sides in Newsmanbut that does not mean he is not on one side. As he would himself admit and as we all know, he has strong views on the current political party in power and his articles speak for his thoughts.

Even in its current “format”, Newsmanis a mighty fine piece of literature and deserves all the stars I gave. The only grouse I have – and it is a major one – is the way it has been structured narratively which takes away the iota of objectivity which Rajdeep might have wanted to preserve in front of a neutral reader.