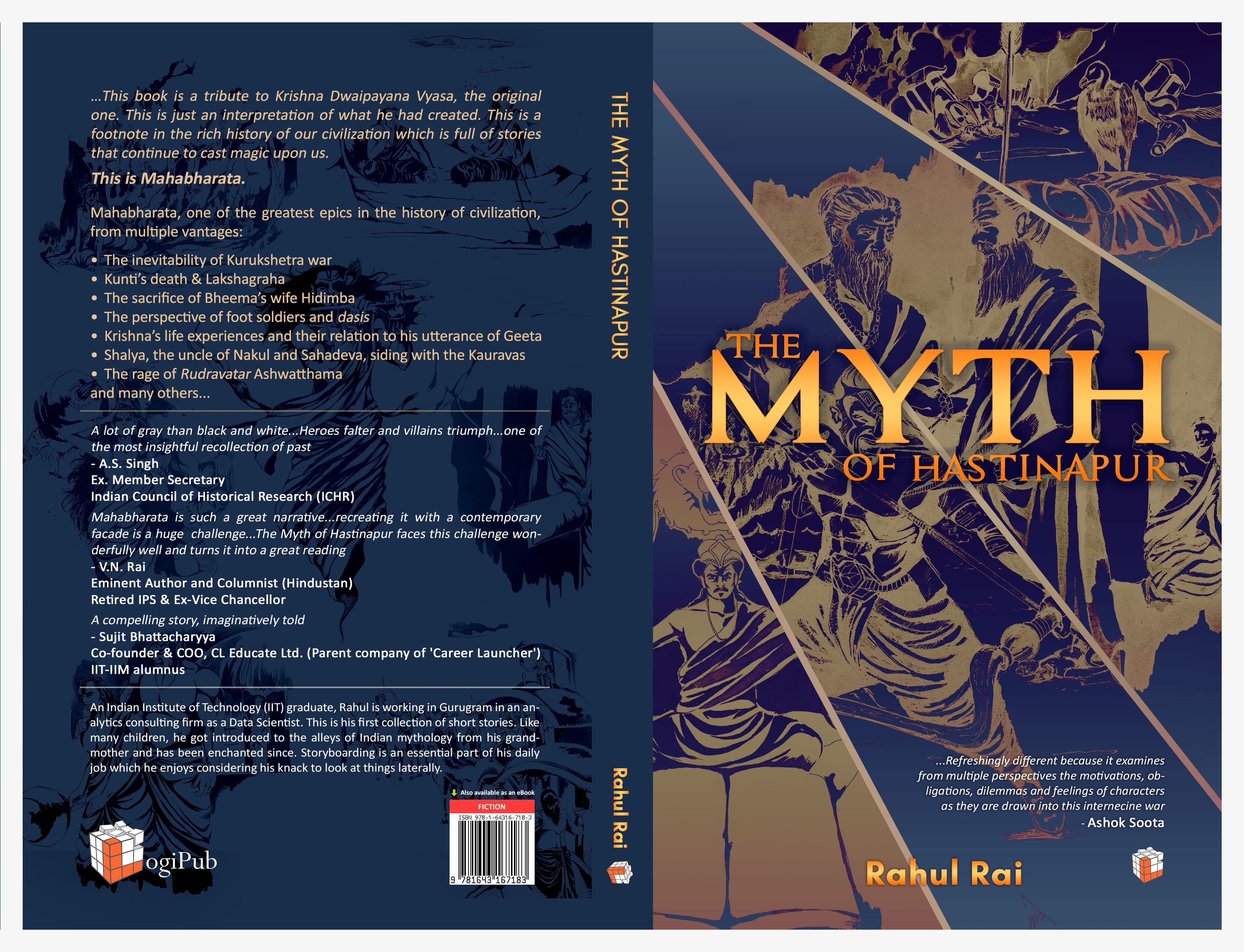 Here is the excerpt from The Myth of Hastinapur.

To buy, The Myth of Hastinapur at the best price, click here.

Draupadi was sitting at the makeshift Shiva temple erected near the boundary of Kurukshetra where the Pandavas had set up their camp. The Lord of Destruction was silently watching over the bloodiest battle in the history of Bharatvarsha where both the armies were being annihilated at a bristling pace, sometimes, through weapons blessed by him. Draupadi had been coming to the temple since the start of the battle. As soon as the army of the Pandavas left for the battlefield every morning, she reached the temple and sat there meditating for at least two hours. Then she would spend most of her day at southern corner of the campsite which acted as the shelter for the wounded. The Rajvaidya was a stickler for discipline and didn’t spare even the Maharani if she made a mistake. Surgery was a serious business; one wrong stitch could mean a life in jeopardy. One less life meant one less soldier to fight from the side of the Pandavas. Draupadi understood that well and took utmost care while tending to their wounds. It was only in the evening when she heard clank of the wheels of returning Rathas being pulled by tired horses that she returned. A lot was at stake for her in this battle – father, brothers, husbands, and sons all fighting for their honor.

‘My honor,’ she thought. It was sixteen days into the battle. Though the Pandavas hadn' lost any critical general of theirs, the Kauravas still seemed insurmountable. Bhishma was dead and Dronacharya too but the list was never-ending. There were Karna, Kripacharya, Ashwatthama, Duryodhana and many other formidable warriors alive nonetheless; the names of whom were still enough to turn the faces of their enemies ashen. Compared to them, the Pandavas had two of the most celebrated generals: serene and calm Arjuna who was capable of engulfing a whole army in a cyclone of arrows and giant of a man, Bheema who was enough to decimate the entire ranks of army fighting with maces and swords using only his fists. Both of them stood like a rock against the strategies of the Kauravas to penetrate the defence of the Pandavas. While Arjuna engaged with the commanders of the army, Bheema busied himself finishing off the soldiers on the ground.

Among her five husbands, Draupadi prayed for the well-being of these two warriors the most as she knew if one of them went down, it would be catastrophic for her whole clan. But they were not enough to hold the fort, she thought. It was Krishna whom she treated as her brother who had created an insurmountable defence around the Pandavas. Krishna bound by an oath not to raise a weapon in the battle spent his nights with the Pandavas strategizing the next day’s battle. “Even if Gods conspire and battle against me, I won’t be frightened till I have Krishna on my side,” Arjuna had said when given a choice between Krishna and his army. And he was proved right on the first day of the battle itself. Krishna’s efforts turned the soft-hearted Arjuna who was ready to leave the battlefield all teary-eyed thinking of the loss it would mean to his extended family and friends into a stone cold warrior who didn’t blink an eye when his arrows pierced the armor of his brothers.

Draupadi’s thoughts drifted to one of the dinner conversations they had a few days before the battle ensued. Krishna had started a discussion around why this conflict was imperative, and the reasons the Pandavas were fighting for.

“I am fighting for my brother. Yudhishthira should get the throne he deserves and which deserves him,” said Sahadeva shaking with anger.

“For my family,” Bheema said to the heads nodding in agreement around the table.

“Why are you participating, Krishna?” asked Yudhishthira in the end when all of them had given similar answers.

Krishna smiled and said, “I am trying to balance the forces. I have already pledged my army to the Kauravas.”

“That makes it even more confounding for you will be fighting against your army,” Yudhishthira said smilingly.

“I won’t be fighting, Maharaja. I had to give away my army as my official duty. The army belongs to the land it represents and not me,” he retorted, “in case you forgot. I am on your side in my capacity and not as a ruler.”

“Krishna at our side, with or without weapons, proves that whatever we are fighting for is of some worth,” Arjuna interjected as the discussion was turning hot.

Krishna washed his hands after dinner and to wipe off his wet hands took cloth from Draupadi who was standing behind him. “You didn’t answer what it is that you are fighting for?” she asked.

Krishna smiled and looked deep into her kohled eyes. There was certain permanence to the sadness he saw there. He remembered Draupadi was not always like that, but something significant had changed thirteen years ago, some wound which was not allowed to heal and had festered for all those years which had transformed her. A lump rose in Krishna’s throat, and the words broke out with some effort, “for you.”

They stood for a while looking into each other’s eyes and then blinked together causing a teardrop to escape. None of her husbands had mentioned her name directly as the reason for the fight but here stood a man regarded by some as God in the flesh, silently enduring his wound, suffering in the same fire she was burning in.

It was some time in the afternoon, and the sun was shining in all its brilliance. Draupadi was applying a medicinal ointment onto a soldier’s ribs who was grimacing in pain. The camp was silent as usual in contrast to nights when it was abuzz with activities. A distant wail or nurses calling for some assistance were the only sounds breaking the monotony. Draupadi heard a distant churn of wheels which was quite unusual as such sounds were not heard in the Pandava’s camp before evening. Once in a while, a foot soldier might arrive bearing some important news from the field, but no Maharathi arrived during the day. Draupadi came out of the dormitory which served as the nursing home. Shading her eyes with one hand, she tried to recognize the approaching rider. A dust storm raised by the wheels hid the figure. As Ratha approached nearer, the burly facade of Bheema became visible. The whole camp knew it must be quite a significant piece of information for which Bheema left the battlefield. He stopped near Draupadi and disembarked carrying a bloodied bowl in his hand.

“Dushasana’s blood,” he said menacingly handing her the bowl.

“At last,” Draupadi said while looking at him. She didn’t return to her camp rather balancing the bowl at the wheel of Bheema’s chariot, she started applying blood of the enemy to her hair left untied since the last thirteen years. The wind was blowing ferociously, and the whole camp stood in silence witnessing the scene. Draupadi’s long hairs caught the wind and flew in abandon. Tiny droplets bloodied the ground around her while some flew down her face in deep red streaks. In a few minutes only, the bowl was almost empty, but she kept scraping it for more.

Excerpted with the permission of author Rahul Rai, The Myth of Hastinapur.

I am a programmer + entrepreneur based in Gurgaon, India. I am mostly into technology businesses - and have been the founder and CEO of iTasveer.com till the recent past. I am now-a-days working on an upcoming ecommerce business (someone remind me to update this with the name of the business once we're publicly launched!). IndiaBookStore.net is a project I develop and maintain in my free time for fun and profit.

Latest posts by Animesh (see all)