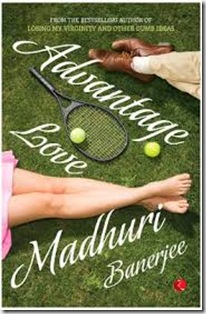 If you’re finding yourself having a Valentine week hangover, make way for some fun romance – the bookish kind!

If you’ve read “Losing my Virginity and Other Dumb Ideas” or “Mistakes like Love and Sex”, you’re already familiar with Madhuri Banerjee’s simple yet compelling style of writing. “Advantage Love” follows suit and doesn’t disappoint. It is a story that a lot of young women will relate to, a story of following one’s dreams while trying to figure out a relationship.

Trisha Mathur is a smart, intelligent and eloquent young lady studying at JNU, New Delhi. Having been raised in Lucknow by two academics, studying in Delhi and living away from home is her first tryst with independence. Being an avid debater, she meets the suave, cool and well-read Vedant Kirloskar at a debating contest. In true filmi style, animosity (on her part) leads to sparks flying and she is floored by more than just his Greek god looks – his ability to spout poetry to woo her, the constant war of words when they debate about everything under the sun. Vedant is the son of a well-known politician in Maharashtra, and it is inevitable that he will step into the shoes of his father soon enough.

What follows is a roller-coaster ride as Trisha tries to balance her relationship with dreams of her own. When Vedant moves away to Mumbai, Trisha tries to pull herself together by immersing herself in the work she loves.

Trisha’s roommate and only close friend from JNU, Juhi plays an important role in helping Trisha get back on her feet after this low phase of her life.

At this point, enter tall, sporty and handsome Abhimanyu, a tennis player who sweeps Trisha off her feet. He knows exactly what makes her happy and their chemistry is great.

But when Vedant resurfaces in her life, Trisha’s world again goes topsy-turvy. Read “Advantage Love” to traverse Trisha’s journey with her.

The book has some strong characters, the protagonist being one of them. Trisha is a very independent woman who doesn’t want her life to be defined by who her partner is, but by her own achievements. That said, while following her dreams, she wants to also share her life with a partner who will accept her the way she is, and who will love her unconditionally. Vedant and Abhimanyu, despite their “star” statuses are very real men, and have the same dreams and insecurities that all men do have. Trisha’s relationship with Juhi is something that all of us identify with, and the presence of a BFF in our lives is something we’re all grateful for.

Oohs and Mehs – I liked that the story was fast paced and had elements that as women we can identify with. Madhuri Banerjee’s style of writing is easy and effective. But I would have loved a slightly more complex series of events, because half way through, things became too predictable.

About the Author – Madhuri Banerjee is a versatile media professional. She runs her own production house, Gray Matter Solution, and has worked in various forms of the visual medium. She is a blogger for CNN IBN, a columnist for Asian Age and a screenplay writer for Bollywood films among other things. She has previously authored two books, “Losing my Virginity and Other Dumb Ideas” and “Mistakes like Love and Sex”, both of which have been bestsellers. She blogs at http://madhuribanerjee.blogspot.in/