Love him or hate him, you just can’t ignore him. Cliched as that statement is, it actually holds quite true for Chetan Bhagat. He makes damn sure it does.

Earlier this week, Chetan Bhagat announced the October release of his latest book, provocatively named ‘ Half Girlfriend ’. One wonders how much time he spent choosing the name! Because that name, that irritating, grammatically incorrect, execrable name has single-handedly gathered enough publicity to launch a rocket, never mind a book. No PR agency could have done better.

The term “#HalfGirlfriend” was trending on twitter for 3 days after the full-page ad that Bhagat splashed across prominent national dailies. Most of the reactions were contemptuous, snide and occasionally, off-colour – but they served Bhagat’s purpose by making him, and his book, the talk of the town.

Here are some of our favourite #HalfGirlfriend tweets: 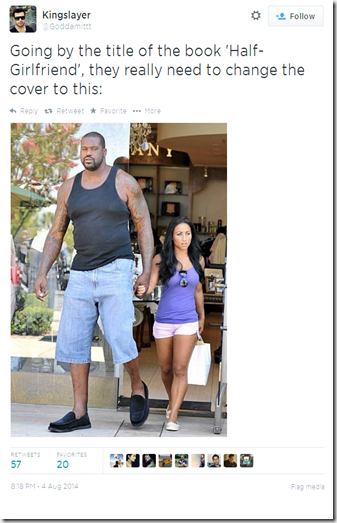 You do the Math! 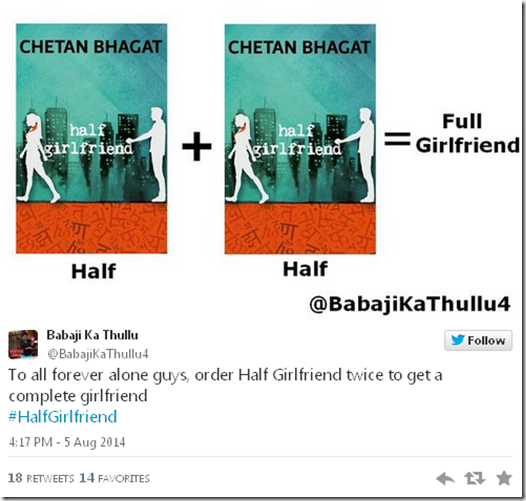 The Bhagat Bashers have a field day…

The X-rated – read at your own risk!

The Truth has been spoken…

So, which of these did you like the most? Tell us! Chetan Bhagat, of course, is notorious for courting controversy; some time back he claimed that Indian youth are only interested in babes and pay packets, while his writing has often been accused of being anti-women. But Bhagat-baiters might be pleasantly surprised by his book What Young India Wants… give it a shot if you will!

Latest posts by IndiaBookStore (see all)