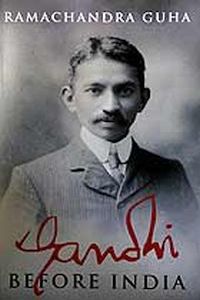 Gandhi before India is a biographical work on M.K. Gandhi. It weaves the story of his life, starting with his time in South Africa and leading on to his involvement in Indian politics. It depicts Gandhi as a lawyer, freedom fighter, philosopher, father and human being, and in vivid detail.

Gandhi has always been a subject of great study. Before reviewing this book, I had read My Experiments with Truth  (the autobiography of M.K Gandhi) and Mahatma Gandhi by Romain Rolland. Thus, I wasn’t expecting any major surprises. However, the author’s strong historical background and vision on the subject left me pleasantly astonished.

Gandhi Before India, as the name suggests, delves into his life before his advent into the Indian political scene. The book essentially revolves around the struggle of Indians in South Africa over a span of two decades and talks about the quasi-aristocratic lineage of Gandhi. It delves into his personal life, his school days and his early days in the pursuit of truth. It goes on to his sojourn in London, where Gandhi attains his degree in law to become a barrister.

The primary plot deals with the passive resistance against the controversial and racist Asiatic Act. The protagonist (Gandhi) exhibits impeccable tenacity in coalescing the multitude to liberate them from the oppressive laws of the colonizer. This leads to the incarceration and torture of Gandhi, not once but several times. Gandhi, with his secular credentials, indefatigably fights for the voiceless and voteless Indians in the diaspora, whereas the South African government practices a smoke-and-mirrors strategy to manipulate the public. This cause keeps Gandhi occupied until his triumph in 1914.

The book also talks about the establishment of the idyllic Tolstoy farm in Gandhi’s quest for an unsophisticated and austere life. He remained focused towards philanthropic ventures in a bid to bring about egalitarianism. He was not in agreement with modern Western materialistic thought, vehemently opposed industrialization and was not a fan of allopathic drugs.

The book also showcases the personal dynamics of Gandhi.  It explains in detail the role of Leo Tolstoy, who was Gandhi’s chief inspiration, along with his mentors Dadabhai Naoroji and Gopal Krishna Gokhale.

Gandhi’s friends Henry Polak, Herman Kallenback and his secretary Sonja Schlesin remained consistently deferential to his ideologies. The magnanimity of Ratan Tata is also worth mentioning. However, every coin has two faces.

The book also probes into Gandhi’s acerbic relations with his eldest son, Harilal, who did not agree with the Gandhian line of thought. His second son, Manilal, also disappointed him when he reneged on his vow of celibacy by having an affair with his best friend’s daughter.

This is a well researched book, except on one occasion. The below excerpt from the Chapter ‘Lawyer-Loyalist’ of the book testifies to the same.

“A Muslim merchant compared Gandhi to a modern day Pharaoh who guided his countrymen ‘in the rough sea far away from rock –underwater…..”

Those who are conversant with Abrahamic religions will find this error startling, as it was Moses who guided his countrymen from the nefarious Pharaoh and not the other way around.

We have to condone this mistake by the author, as I believe that he has misquoted out of a lapse in judgment.

Guha traverses into the details of his story, leaving us with no trace of doubt. The language of the book is lucid, with occasional surges of fancy words. The book does get muddled at times, often becoming redundant and boring.  However, the author sporadically injects a few words of wisdom to keep the reader engaged.

History books are often boring; a biographer does not have the liberty to make it interesting like a fiction writer. But Guha maintains a decent pace coupled with words laden with poignancy to keep the reader engaged. This book can be considered a masterpiece for a student of history, but as a casual reader, I wish it were trimmed down a little.

Check out our review of Gandhi's My Experiments with Truth here. Also, read more about author Ramachandra Guha on his website.