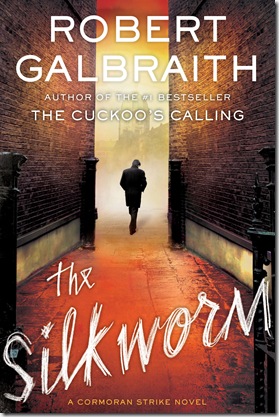 Robert Galbraith (who we all know is really J.K.Rowling!)  is back with the second novel , The Silkworm, starring that curly-haired, surly-tempered down-on-his-luck detective/replacement-for-Harry-Potter-in-the-grim-Muggle-world, Cormoran Strike. The book releases on June 20th, and an excerpt of the first two chapters has just been released.

This is what we know, based on the blurb and the excerpt:

1. Cormoran Strike is doing a leetle better than the last time we met him. He now has a home of his own, so his office no longer doubles as a bedroom. He seems to have clients too – at least, enough of them that he can afford to kick out a well-paying but rude one out of his office, mere pages into the novel.

2. Robin Ellacott is still there! So her fiance Matthew hasn’t been able to persuade her to take up a more sensible, better-paying job elsewhere and she gets to live her dream of working at a detective agency. Some turbulence ahead for this happy couple? Hmmm.

3. The plot of the book revolves around a novelist, Owen Quine, who goes missing just as he completes the manuscript of a tell-all book featuring a lot of real people, who would all go to some lengths to ensure that the book never sees light of day. Would those lengths include silencing the writer permanently?

4. The buzz is that the book is all about the phone-hacking scandal in Britain, where some employees of a British newspaper have been accused of hacking phone lines to snoop on people. The very first chapter makes it very clear what Strike, the author’s alter ego, thinks of “private dicks who spend their time hacking phone messages.”

This is what we’re hoping for:

1. The breathtakingly lovely and pathologically unstable Charlotte Campbell better have a much MUCH bigger role in this book. In the last book she ended up engaged to Jago Ross, and Cormoran suspects that her motive is to push him into ‘rescuing’ her from a disastrous mistake. So will he?  What other tricks will the devious Charlotte come up with?

2. The same goes for Johny Rokeby, Strike’s aging rockstar dad with whom he has a less-than-perfect (more like non-existent) relationship. There’s a sideline that needs to be explored. There were suggestions in the last book that Cormoran has is repaying, slowly, a loan from his much-despised dad. What’s the full story there?

3. Last time around, the setting was the glitzy world of young, sexy models, fashion designers and hotshot singing sensations. This time, the setting seems to be the literary world – a world with much more scope for critical commentary, fingers crossed!