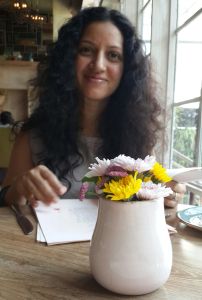 With her book, Supertraits of Superstars , author Priyanka Sinha Jha has been receiving rave reviews. Being one of the youngest senior editors with the Express group, Priyanka has many feathers in her cap. Her interviews with Bollywood artists are well known. IndiaBookStore gets candid with the author –

1. Congrats on the your success! Supertraits of Superstars has been creating some waves. How does it feel to be on the other side of the table – from editor to writer?

Thanks very much. I am over the moon at the fact that it has been well received by the readers and that the message that good people don’t always finish last, has come across through the examples of the 11 superstars mentioned in Supertraits of Superstars. The switch from being editor to writer is a constant as i have always been something of a reporting, on-the-field editor–i write my column every week and possibly a few articles. so in a sense, my work is up for judgement every now and then. However, this being a book, made the whole experience –the writing and people’s response to it, very overwhelming. And the fact that the iconic Mr Amitabh Bachchan formally launched it, was huge honour and very encouraging. I certainly have no reason to complain.

2. ‘Supertraits’ – this indicates great talent or extraordinary ability. Do you think people are born with supertraits, or can they be picked up as we go about our lives

Those who have read the book have liked the fact that the Supertraits mentioned in the book are traits or qualities that are simple, good habits like discipline, focus, attention to details etc. One may or may not be born with it but one can certainly acquire it with a certain amount of effort. Making the effort and working towards inculcating these qualities may sound simple enough but it involves a lifetime of unrelenting efforts, so yes, it’s possible but it’s not easy.

3. Aside from journalist and editor, what other hats does Priyanka don? Who are you, at the end of the day?

That’s a very profound question! Who am I at the end of the day? The hats keep changing–wife, daughter, friend, sister, mentor, student among many other roles that we all play but through it all, the journalist is a constant. After all, I write, therefore, I am.

4. How much do you think your stint as a journalist contributed to the creation of this book?

Well if I wasn’t a journalist, my first book would have probably been a work of fiction. A journalist’s training creates a lasting bond with facts ( even though a lot of people think otherwise), it gives you a certain writing discipline, and an ability to cope with deadlines. It’s no surprise therefore that several authors actually started out as journalists.

5. Was it easier to develop a unique perspective on Bollywood, or conversely, harder?

The easy part about writing a book on Bollywood personalities was that one knows for certain that it would be of interest to a lot of people out there but then again, Bollywood coverage in our newspapers and websites is so exhaustive that the book had to be very definitive in what it was trying to say.

6. Coming to a question that many young people today have – how different are celebrities from the aam aadmi really? What does it take to achieve star status? That ‘X factor’ or tried-and-tested hard work and perseverance?

Are celebrities different from the aam aadmi? Yes and no. The only major differences between a common man and a celebrity is in the circumstances and how they have navigated through those for better or worse. Other than that, the emotions they go through, their worries or complexes are not very different.

In times when even 15 nanoseconds of fame and notoriety can land you in a television show, almost anyone can achieve fame. However, merely being famous for the sake of being famous is not success. True success or star status in any field, comes only after facing adversities. If you can survive the hard times without degenerating, you are good. The X factor, I feel is a very overrated virtue. One may not born with it but it can certainly be developed over time.

7. Big B launching your book – that must have been a proud moment! How did you feel during the launch – proud, anxious, relieved?

As I mentioned earlier, I was over the moon when he agreed–during one of our meetings, I showed him the cover of the book on my phone and he appeared to like it so I mustered all my courage and asked him rather clumsily if he would do the honours. Much to my surprise and delight, he agreed and was very helpful in that he told me to send details of the launch to his office so that a date could be finalised. The fact that he was so gracious and wonderful about it only reiterated the point that I make about his impeccable sense of discipline in Supertraits of Superstars. I was obviously a bundle of nerves and I can never thank him enough for that wonderful gesture. And then again, my mother is a huge fan of Mr Bachchan and him launching my book Supertraits of Superstars made the moment and the book even more special.

8. I know it’s probably difficult to pick, but.. out of the 11 superstars in your book, whom do you most identify with? Whose story speaks to you the most?

I would say that there is a part in everyone’s story that speaks to me– Aishwarya’s stoic handling of criticism, Shah Rukh’s boundless passion for everything he does or Ranbir’s focus, do strike a chord. However, Mr Bachchan’s discipline, Aamir’s patience and unerring eye for detail, Karan Johar’s people skills are supertraits are qualities that perhaps I still have to work on.

9. There’s a lot of talk about gender discrimination in many fields, including literature and science. Have you seen this happen in the entertainment industry? What’s your take on the current scenario?

Gender discrimination at workplace is a reality across sectors the world over and though in Bollywood, there is parity in remuneration between actors and actresses, it is driven more by commerce than gender. However, the film industry in several ways is more equal than many other sectors–anyone who is willing to grab an opportunity with both hands and work hard is happily embraced and be successful.

10. We’ve heard that you’re quite the travel buff – which has been your most memorable trip so far? Feel free to ramble on!

Yes, I am quite the wanderer but the thing about my travelling is that it is seldom driven by destinations. I am as happy driving to Lonavala as I am flying to London. I can’t quite explain it but it calms me down. My most memorable trip was my first ever solo trip to London wherein a work friend, kindly took me in and showed me around. During this trip I travelled to Startford Upon Avon, William Shakespeare’s birthplace and gazed around reverentially while the tour guide explained the origin of the phrase–stop-gap-arrangement. Another memorable trip was to Venice with my husband Piyush Jha–since we got married in November, just a month before Screen Awards, there was no room for a long-drawn vacay after the wedding , so we decided to go for it, before the wedding.

11. Your writing – how has it helped you as a person? People talk about how writing evolves as you grow, have you experienced this?

A lot of what I know of life in general has been learnt on the job, while writing. One of my first assignments when I came to Mumbai was on Bar Girls who were protesting against the state government’s clampdown and then over the course of my career I have had the opportunity to meet some of the brightest people like Mukesh Ambani, Ness Wadia, Shobhaa De, Amitabh Bachchan, Shah Rukh Khan, Shashi Tharoor, Gloria Steinem and Rahul Dravid among others and I am sure that the exposure in writing about a whole range of subjects and people –city issues, business and celebrities–has influenced my writing at several levels.

12. Finally, a quick rapid fire to finish things up. One word only!
a. Writing or editing? – Editing
b. Rise with the sun or night owl? – Night Owl
c. Bollywood stars entering politics – Theater of the absurd
d. The one Khan to rule them all? – No Comments! 🙂

Thank you for taking time out of your busy schedule to speak to us. It was great interviewing you! IndiaBookStore wishes you all the best for all your future endeavours.

Editor and Writer at IndiaBookStore
Wanderer, nature freak and lover of all things science-y. Certified devourer of all printed matter.