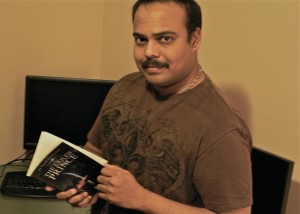 The Crystal Guardian series belongs to the sci-fi genre that weaves an interesting twist into the well-known tale of Lord Rama. Here, we question author Ravi on this interesting new mythical work, with some intriguing results!

What more can you tell us about the book without giving away too much of the plot?

Crystal Guardian series is a lateral story that happens during the time of Rama. Many know the story of Rama, but this trilogy pushes a different purpose to the turn of events. The aim of the trilogy is to question the entire epic in the larger picture.

Why Lord Rama? Why not create an original character?

Rama is the vehicle used for delivering this plot. His view has never been said so far. The story that is being told by the trilogy is very different.  It is designed to make a person curious and question the events. A newly created character cannot achieve that. It can only be done when a character is well known.

What sort of research into Lord Rama did you carry out? How much does your character coincide with the ‘canonical version’? 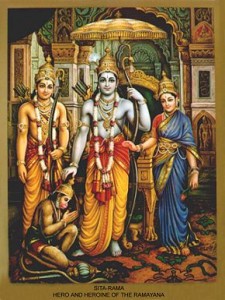 A classic scene from the Ramayana

The character is the same; superficially the events remain the same. But the entire reasoning changes. A good tale is never about the “who and what”, its always about the “how and why”. The amount of study that has gone into these epics is specifically to answer and pose more questions on the clichéd tale.

Travels to many places and correlated studies between tales across country and nations have exposed several threads that led me to the core of this plot.

Your website says that you are ‘Of the firm belief that our myths are linked to our evolution as a species.’ Tell us more about this.

Stories and hero worship is very common in several civilizations. Stories propel our minds to think and imagine.

I believe one of the reasons for our evolution as a society and man in general, is due to the areas of fear, faith and belief system. We either explore or devote or question ridicule them.  By either fear or devotion to those areas man looks to the universe inside his own self or by questioning it, he looks for external answers. Either ways, man seeks answers. When answers are sought, the universe is bound to provide them; the process to attain is evolution. It all begins with stories that are either based on faith or myth.

Ever since The Shiva Trilogy, a lot of authors create stories using mythological characters as heroes. Which ones have you enjoyed reading? 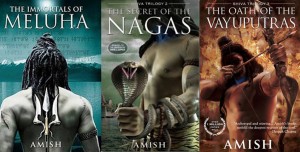 The Shiva Trilogy by Amish

Actually, I have not read much of newer generation mythology books. I have however read quite a bit on history, architecture, travel and the works on The Gita, Ramayana (both in English and vernacular releases). My story is sort of a blend between the likes of Carl Sagan, D Brown and our own native story.

Do you think Indian readers have suddenly woken up to the richness of their cultural heritage, and hence their interest in exploring such stories?

Yes, it is very hearty to see the surge in interests. I believe these stories had a purpose, there is superficial information and there is buried treasure. For the seeker, he gets answers in all the areas as mentioned before. The younger generation needs to dream and visualize the richness in Indian texts. Our mythology needs to also evolve to meet the challenges of western influences. I believe the newer authors are working towards that and the readers will find it more interesting to see what our own treasure is in our backyard.

Are you a plotter or a pantser?

Honestly, with my experience writing Rama, one can only be a pantser. It is very difficult to explain how and why, but the character hijacks you somewhere down the road. That is my experience with Rama so far.

How has the initial reactions been from your peers, readers and critics?

There have been people who love it and some who critique it. The ones who have written to me have been very impressive in their questions. Many are curious about the chapter 148 and in relation to the last lines of Rama in book I. Some have questioned the existence of the crystal and that of Rama during the British era. When a story begins to raise questions on its possibilities and deviations that gives great happiness to me. Those who have thought beyond the fantasy woven around the story have been very curious on the plot that is hidden in the series.

Quick fire – Put the first word that comes into your mind! 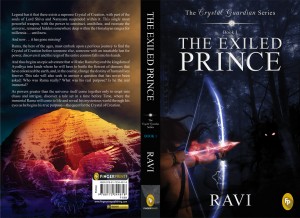 Book 1 of The Crystal Guardian series- The Exiled Prince

o   Favorite line or quote – ” Science and religion are not at odds. Science is simply too young to understand. ” – Dan Brown/Angels & Demons

o   Favorite thing about any book – Depends on the book, but in general the rabbit hole it makes me jump into is just priceless.