When you play the game of thrones, you win or you die. There is no middle ground.

– Queen Cersei, A Game of Thrones

What do you say about a book that someone hasn’t already said in the 29, 359 reviews and 588,106 ratings it has already received on just one website? There was a time when I was tired of looking at the tweets and Facebook updates about this book/series. Finally, after finishing this book (after two failed attempts), I was cursing my inept, impatient self for having overlooked this gem of a book for so long.

You lookin’ at me? – one of The Others, the supernatural ice-creatures

The story happens in a world with two continents – Westeros and Essos. The story happens in three principal areas – The North, The East and the Land of seven kingdoms. The Westeros, a land suggestive of Medieval Europe, is ruled by minor rulers whose king is King Robert Baratheon. The ruler of Winterfell is Eddard Stark, a just and able lord and a friend of the King. The King asks Eddard to join him as the Hand of the King (a chief adviser to the king) after the death of the previous Hand. 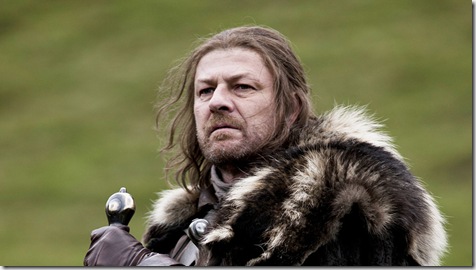 Sean Bean as Ned Stark in the HBO series

After becoming the Hand, Eddard realizes that the death of the previous hand was not natural. He starts investigating and does so rather boldly, making himself many enemies. And thus the plot proceeds. In the North are the Night’s Watch men who protect the realm from intruders beyond The Wall – a barrier that separates the common man from the unruly. To the east are the Targaryens, who are the vengeful and rightful heirs to the Iron throne, but have been ousted by the current rulers. What follows is a story of political intrigue, struggle for power and complex characters who have captured people’s minds and hearts; characters such as Daenerys Targaryen, the young princess-warrior and Tyrion Lannister, the dwarf advisor.

Daenerys Targaryen and her pet dragon

There is no dearth of great characters. There are a million characters and most of them are necessary and congruent to the plot. The main characters are Robert Baratheon the King, Lord Eddard Stark and his family, Queen Cersei, the wife of Robert, Tyrion and Jaime Lannister, the queen’s brothers, Lord Varys and Petyr Baelish, the King’s council men and Daenerys Targaryen, the rightful heir to the throne. Each of these characters have been intricately carved and perfectly fashioned to represent what they truly are, making this one of the successes of the book. 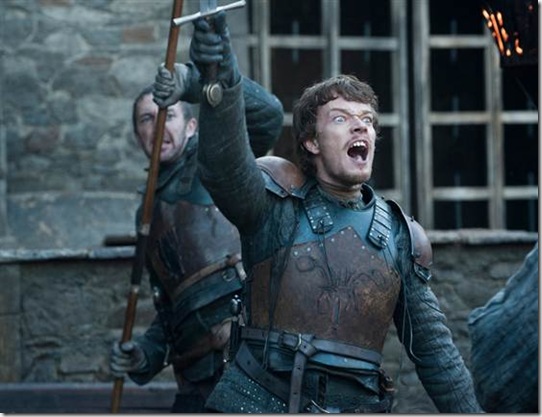 The book is a narration of limited third person omniscient perspective with 8 main points of view alternating across it. Since the reader gets a peek into each characters’ thoughts, the reader tends to form a strong opinion on each of these characters. The plot is filled with amazing innovative concepts that make the author a striking and brilliant one. The author’s description of the lands and scenes is remarkable. If you are looking for a Good vs. Evil kind of plot, then this is definitely not it. The story is hard-hitting and death is omnipresent but that doesn’t stop one from loving this book. I read the book while constantly referring to its map (Thanks to HBO!)  and I just can’t help but marvel at the author’s imagination.

I am not a great fan of fantasy but this book has managed to convert me. With engaging characters, a brilliant plot, innumerable twists and an array of cliffhangers, this is one of those books that you will read and re-read just for the fun of it. You might find it getting a little heavy at times, but a little perseverance is all you need to get your mind blown away by the plot Mr. Martin has envisioned.

If you enjoyed this review of Book #1 of the A Song of Ice and Fire series, read more on how people got hooked to this series, follow these links to The New Yorker and The Guardian.