Often wrongly thought of as prostitutes, Geisha or Geiko are women of art, elegant entertainers and hostesses from the land of the rising sun. Dancing, singing and conducting intelligent conversations while adapting to the tastes of their guests are some of the talents they possess and refine, honing them over years of routine and hard work. Through a vivid autobiographical account of her life, Mineko Iwasaki (below) , the retired geisha whose experiences Arthur Golden used in his fictional work Memoirs of a Geisha, aims to reach out to the people living outside the exclusive world of the Geisha. 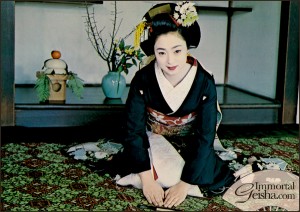 THE GOODS-
Misconceptions about geisha and myths about their profession thrive throughout the world, some propagated through fictionalized accounts of their lives. The author tries to erase all these using her memories as a medium. Although surprisingly (and at times unconvincingly) good at remembering details, she effectively puts forth her experiences as a child during which she shifted from one family into another highlighting her relationships within the limited circle of acquaintances she had.

CHARACTERS-
Mineko started her training at the tender age of three. Unlike other geisha, she is retired of her own volition, in a failed attempt to ignite change in what she thought to be a stagnating profession. Her account paints a living picture of her experiences and turmoil. Being the best of her time was not always something that she wished for, often being mistreated by her peers due to her popularity, but she put her heart and soul into work, aiming only to get better and beat her own record. Feminine emotions overflow throughout the book as she talks about jealousy and bitterness, love and tenderness with equal emphasis. The delicate, exquisite and fleeting moments of this unique life are captured with a tasteful poignancy which enthrals the readers into picturing the images drawn by the author, her first dance and appearance as a Geisha and well as her last show, her sorrows and losses and finally the crux of her fame which ends in a peaceful and content life with her husband and daughter.

READERS BEWARE- CAUTION WHILE READING!
As with most Japanese works, the book should be pictured as an image and not just read as plain black and white text rendered on paper. Most people have heard of Memoirs of a Geisha, a much more popular book which uses Mineko Iwasaki’s experiences as a foundation for its plotline and which was made into a popular movie. According to Mineko, Memoirs of a Geisha portrays many facts inaccurately. For example, she insists that the controversial ‘mizuage’ ceremony of Memoirs is actually quite an innocent one.

VERDICT-
One cannot really come to a conclusion based on these contradictory statements. However reading both these works in parallel; one a fictionalized account and the other an autobiography, would prove to be more a more insightful experience. In conclusion, Geisha of Gion is a good and satisfying read; it should certainly be included on your shelves. It is especially recommended for those who have interest in human lives; their trials and tribulations and how those are overcome.

Writer at IndiaBookStore
Discovering myself and the world, a Japanophile and a book lover.