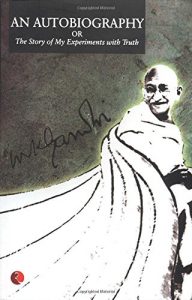 Gandhiji's autobiography is a must-read for every Indian. Every citizen must form their own unbiased opinion of the Father of the Nation, and reading his own words will help one do that. This is one of those rare books which the reader either loves or hates; there is no middle ground.

It was with profound trepidation that I began typing the review of this intriguing book. Mahatma Gandhi was not an ordinary man. This is a statement that begs to be investigated. His autobiography offers the perfect opportunity to gaze into the life of an iconic leader whose humility is married to a charismatic persona.

Every Indian knows about this great leader. Every school going kid is taught to unthinkingly sing his praises. School textbooks present him as faultless, almost divine. This book will revolutionize your thinking and present Gandhiji as a man.

Gandhiji was never perfect. He himself acknowledges this right from the first page. The book demonstrates his incredible humbleness. The writing style is discreet. The words are stitched up in a facile tone gingered with grandiloquence. He reveals his personal life in a vivid fashion not making any attempt to camouflage the truth about himself, however bitter, from his reading audience.

The writer is led by a barrage of experiments ranging from elocution classes to purge his shyness and fear of public speaking, to shaking a leg on the dance floor, to taking up singing sessions. He endeavoured to learn Latin and treated diseases by dietic modifications. He walked 10 miles a day, staunchly followed a vegetarian diet and practiced rigorous fasting. You often turn to look at the cover page mulling whether this mild-looking dhoti clad figure who gave up salt for 10 years to wrangle against British rule would be so adventurous, so determined to find the 'truth' about every aspect of life that he carried out his own unbiased research into it and refused to be satisfied with anybody else's notions of right and wrong.

Gandhiji was an erudite personality. He was a student of comparative religion and one can witness the wisdom in his spirituality, he being a devout Hindu who showed immense respect for all religions. He was not afraid to confess his mistakes whether it was his concupiscence drawing him to fulfil his carnal desires or, later, his abnegation of the warmth of his wife to become a celibate.

He exhibits remarkable fortitude and patience in his personal and professional life. His non-violent views may have appeared iconoclastic and controversial at the time, but they proved very effective.

He talks about God, faith, hope, truth, failure, success and morality. A lot of people have painted an image of him based on the history projected in  textbooks. But they fail to do justice to his character. This book is a must read for anyone who has just entered college. Teenagers may also pick it up but a young school kid may not be able to penetrate the depth of his teaching. It is a heavy read, but will help you develop a thought process which will transcend your rational faculty. This book shall present a pragmatic approach to solve problems in real life as Gandhiji portrays from his own life experiences.

One of my friends gave up reading this book finding his teaching hypocritical and obsolete. On the other hand, I have become a fan of his legacy. Anybody who seeks to reform himself cannot afford to miss this book. This a radical piece of literature which will illumine your soul.

Are you interested in autobiographies of eminent world leaders? Here's our review of Long Walk to Freedom by Nelson Mandela.