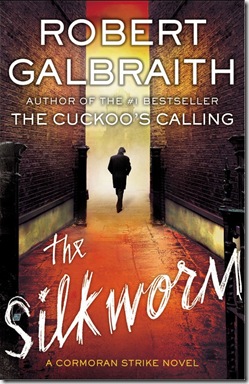 Deftly plotted, intricately detailed and with much better character development than its predecessor, The Silkworm is a must-read in the best traditions of British detective fiction.

This time around, instead of high fashion, highbrow literature is the scene of the crime – literally. A not-so-famous writer disappears soon after submitting a dangerously libelous manuscript which rocks the publishing world while it mocks its denizens. Not long afterwards, he is found murdered exactly like the hero in that last novel – with his body cleaved open, his intestines missing, and seven plates and cutlery neatly arranged around his corpse.

The characters are equally promising. Each suspect is presented in turn, and each of them might fit the bill – the eccentric stubborn long-suffering wife. The voluptuous wannabe writer girlfriend. The mean bitchy animal-loving literary agent. The repressed gay publisher. The unhappily married editor. The chauvinistic pseudo-intellectual Booker-winning author (my personal favourite – JKR’s mockery is spot-on.)

Interspersed with crime-solving are the other elements of the plot – Cormoran, the one-legged Afghan veteran faces hostility from the official police force for ‘showing them up’ in his first case. Robin, his secretary, hopes her boss will see her potential as an investigating partner and offer her training, but is frustrated by his apparent lack of perspicacity. She also has to deal with a less-than-completely-supportive fiancé who cannot understand her professional ambitions and is jealous of her war hero boss who keeps being mentioned in the newspapers. There is a smattering of literary criticism – examples of the writing found in British tabloids, wannabe writer blogs, comments under those blogs, writing by bad highbrow writers, interviews of good highbrow writers – which are so accurately-yet-subtly worded that they become critiques in and of themselves.

Cavilers and nit-pickers will find some things to crib about. Being a relentless re-reader of the Harry Potter series myself, it amuses me to notice that JKR has a few stock characters that she reuses: the publicity-shy hero who is great at imaginative leaps while connecting the dots but whose temper sometimes gets the better of him (is Private Detective the Muggle equivalent of Auror?), the loyal, efficient, maternal-yet-feminist sidekick (with Wikipedia instead of Madam Pinch’s library to her rescue), her immature fiancé who is resentful of the famous hero (but with glimpses of better nature hidden deep inside). The denunciation of the idle rich (mostly depicted as snooty, social-climbing, class-conscious and either blissfully oblivious to or willfully uncaring about the less fortunate in society) is also a constant theme, and frankly, it gets a bit repetitive. Fans of literary fiction could also find the predominance of adjectives overwhelming.

But all said and done, The Silkworm more than hits the target. Those looking for well-crafted whodunits are advised to grab this one fast and try guessing who done it. In the best stiff-upper-lipped traditions of the Detection Club, the book is littered with clues, and the truly sharp will be able to spot the murderer early on. Alas, I cannot count myself amongst those brainy few; I was flummoxed right until the end. Perversely, however, this contributed to my satisfaction. Isn’t being hoodwinked by a well-crafted murder mystery part of the fun?