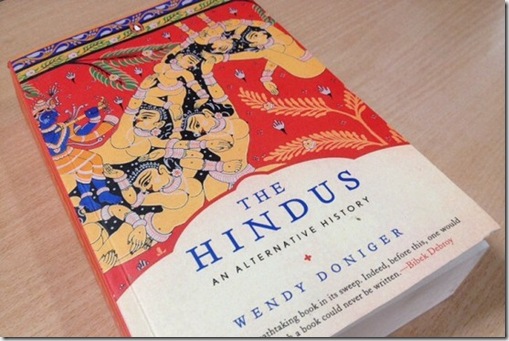 Someday we might have ‘Reading Books: An Alternate History’, writes Richa Singh, arguing against banning books.

Why Penguin withdrawing copies of Wendy Doniger’s book cannot be treated as an isolated incident is mirrored in the innumerable books banned by the Indian system. Yes, this is not the first time this has happened.

In words of Doniger, “They [Penguin India] were finally defeated by the true villain of this piece—the Indian law that makes it a criminal rather than civil offense to publish a book that offends any Hindu, a law that jeopardizes the physical safety of any publisher, no matter how ludicrous the accusation brought against a book.”

For those of you who are reading about this for the first time, read this news article.

What shocked the literati and readers across the globe was the incessant display of curbing of freedom of speech by a society over and over again. India is among the top few countries notorious for extensive banning of books. You want statistics? We are ranked at world 140 on World Press Freedom Index, just after Afghanistan.

Banned Books and their Enduring Popularity

Lets run a few fun facts now, shall we? The Bible has been banned in North Korea on ‘religious’ grounds. Alice in Wonderland in Hunan, China for its portrayal of animals containing same intellect as humans. Uncle Tom’s Cabin for its anti-slavery sentiment banned during the Civil War. Mein Kampf for being extremist in Russia. Lolita for themes of underage sexuality. Frankenstein in South Africa for obscene content. The Diary of Anne Frank in Lebanon for portraying Jews favourably. Brave New World for sexual explicitness in Australia. Animal Farm in UAE for being against Islamic laws.

Why don’t we see that these books which have at one time or the other faced a ban also crept into top hundred books of all times? As a bibliophile I am shocked that there is a section of readers not exposed to the content of these books. Books which have contributed extensively to my own intellectual capacity. And perhaps having banned Doniger’s book we are doing exactly that. We are one step closer to limiting the minds of our future generations.

Why, may I ask, should art and artists apologise when libellous politicians don’t?

When we speak about freedom of speech why do we not get perturbed that along with the writer, we readers have been locked down? Why is this considered a banning of a book, why not see it as a banning of readers? My freedom to read is almost as important as Doniger’s freedom to write and Penguin’s freedom to publish.

I discovered Rushdie, when I first heard of the Satanic Verses – of course juxtaposed with its infamous ban and fatwa. What perturbed me was the reaction of the so called ‘civil society’ around me, levelling their guns against a book which many admitted they hadn’t read. As individuals are we ready to dismiss something we have not even judged ourselves?

It is this that troubles me. Not the simple idea of banning a book – that doesn’t.

I know I am no one to judge a book and its credentials but then who are the rest of the people? And why should I believe them? Perhaps tomorrow they will ban me? Then will I be forced to say, Yes, I agree with that too?

At this rate, by virtue of our laws, perhaps someday we will have “Reading Books: An Alternate History”.

Do some books deserve to be banned? asks Mugdha Wagle as she explores the other side of the debate

Before you jump down my throat for making such a heretical statement, consider the list of books below:

1. The Protocols of the Elders of Zion: A hoax book describing the Jewish plan for world domination. Used by Adolf Hitler to incite hatred toward Jews and ultimately bring about the Holocaust.
2. Magazines showing images of child pornography, rape pornography and zoophilia.
3. Final Exit, a self-help book which gives practical advice on how to commit suicide.
4. A book, written by a person with solid academic credentials, which blames the victims for rape, and gives well-researched data that supports that claim.

How many people would be willing to shout ‘Freedom of Expression’ if these books were banned?

I am NOT in favour of Wendy Doniger’s book being banned/recalled/horror of horrors, pulped. (The very word makes me shudder, imagining a bunch of books being fed into a huge mixer-grinder-type machine sporting huge fangs and dripping blood.) But I have not read the book. I am prejudiced in her favour because she is a well-known and oft-published academician. But am I justified in signing a petition asking for Penguin’s decision to be reversed? Not unless I am willing to do the same for all the books I mentioned above. Because freedom of expression should apply to everyone, not just secular liberal intellectuals. It should apply to Nazis, eugenicists, violent paedophiles, women haters and terrorists. Right?

Some of the reactions to the issue have struck me as – well, typical of the herd mentality that we all have. The minute we hear that a book has been banned, we are all up in arms.

Maybe we should think, before we react

Consider a few factors, such as the ones enumerated in Rajeev Srinivasan’s article, before calling any individual or organization ‘fascist’ or ‘fundamentalist’. Is it just possible, that the Shiksha Bachao Andolan had a valid point after all? Just because they come across as crude, should we dismiss their claims? Maybe their arguments are academically valid (one court has apparently considered them legally valid).  It’s possible, isn’t it?

The brouhaha right now has less to do with freedom of speech and more to do with the fear that ‘Hindu fundamentalism is on the rise’. I don’t remember so much media coverage, so much twitter outrage when a book called The Descent of Air India was withdrawn earlier this year, or when a book on Sahara India was prevented from being released last year. To say nothing of an obscure Spanish-language fictionalized version of a certain Italian-born lady politician which was not only banned but effectively buried. Why did nobody care about freedom of speech then?

What is your opinion? Let us know what YOU think about the controversy.