Gabriel Garcia Marquez – ‘Gabo’ as he was affectionately known by his Latin American fans – was one of the most popular as well as critically praised authors that the world has seen. He popularized the style called magic realism – in which some rules of the real world are cast aside while the rest of the story portrays a realistic scenario. Here are some of his most acclaimed works: 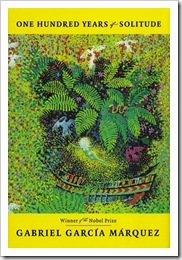 One Hundred Years of Solitude

Arguably his best-known work and considered by many his masterpiece, this is the story of seven generations of the Buendía Family in the fictional town of Macondo. The founding patriarch of Macondo, José Arcadio Buendía, creates Macondo, a city of mirrors. Though he intends it to be a utopian land, Macondo is repeatedly subjected to extraordinary misfortunes, culminating in a hurricane that destroys it. The dominant theme of the book is the inevitable repetition of history and man’s inability to defy fate. Click to check prices. 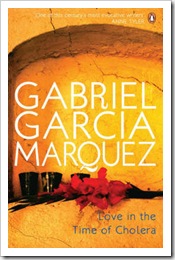 Love in the Time of Cholera

Some consider this a triangular love story, with the woman caught between two very different types of men: one, a romantic, passionate dreamer and the other a hard-headed, practical man (who, incidentally, is devoted to finding a cure for cholera, which is where the novel derives its name from.)  Garcia himself warned readers not to ‘fall into my trap’. The novel is an examination of romantic love, and describes love as a sickness, just like cholera. Click to check prices. 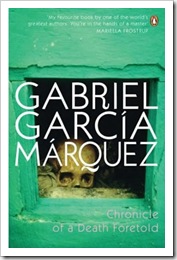 Chronicle of a Death Foretold

The plot of the novel revolves around Santiago Nasar’s murder. Part detective story (though the reader is told who the murderer is, right at the beginning) and part non-fiction, written in a journalistic style,  the story is based on an actual murder that took place. The narrator acts as a detective, uncovering the events that led to the murder in great detail. Click to check prices. 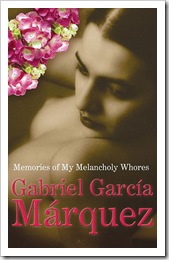 Memories of my Melancholy Whores

A controversial late work by Marquez (it was banned in Iran for ‘promoting prostitution’), thisais the story of a 90-year-old journalist who seeks sex with a young prostitute selling her virginity to help her family. Instead of sex, he discovers love for the first time in his life. It is the last novella written by the author. Click to check prices. 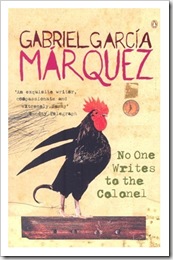 No One Writes to the Colonel

An impoverished, retired colonel, a veteran of the Thousand Days’ War, hankers after the pension he had been promised 15 years earlier. The colonel and his asthmatic wife, who have lost their son and are struggling with financial difficulties, live in a village which is under martial law. The novel explores the themes of corruption and government repression. Click to check prices.