We all know this book's going to be a bestseller – no One Indian Girl review, however good or bad, can change that. One Indian Girl is the first time Chetan Bhagat tells a story from a woman's point of view. Does it live up to the hype? Let's see.

Radhika Mehta is a good little Indian girl who studied hard, got into IIM Ahmedabad and then landed her dream job at the New York office of Goldman Sachs. But she's insecure about her looks. She has a couple of failed relationships. Finally, to please her nagging mother, she agrees to have an arranged marriage.

The story begins with Radhika and her family at the Marriott in Goa, preparing for her wedding to Brijesh. As the bride tries to focus on her bachelorette party, mehendi and sangeet, both her ex-lovers land at her wedding. Each of them is determined to make her elope with him.

The story is a breeze, a typical Bollywood masala entertainer. While reading it I was already imagining the 'scenes' on screen. (For the record, Kangana Ranaut has already said she'd love to play the heroine, and I'm sure it's just a matter of time.) Chetan Bhagat knows what his audience wants and delivers it. There is never a dull moment. I read the whole thing in one sitting.

The Punjabi 'destination wedding' provides for several instances of harmless humour. The chuckle-worthy bits of social commentary hidden in there are certainly worth a read. Descriptions of the sangeet practice and the hapless dance instructor, the bhajan session etc. will make you smile. And Radhika's shaadi.com profile, written by her mother, is all too recognisable. 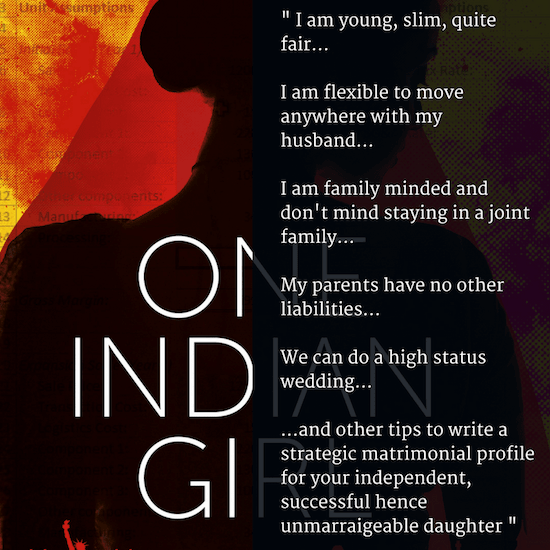 Radhika's mother creates a shaadi.com profile for her, aimed at eliciting responses from 'good boys'. Radhika is horrified!

So, is this a story about feminism?

Bhagat ticks all the boxes: Strong female protagonist. Independent woman with a mind of her own who lives alone and makes her own decisions. A woman who wants to have sex, and to some extent, takes the initiative in seeking sex. However, that doesn't make this a story about 'feminism'. If at all there is a message in this story, it is not "A woman can do anything she wants" but rather, "Once she has enough money a woman can do anything she wants."

However, given the enormous influence that the author has on his large readership, I am glad that this book tries so hard. And in several places, it hits all the right notes. Chetan Bhagat gets it chillingly right when he makes both her ex-lovers question Radhika's maternal instincts simply because of her professional success. "Would you even be affectionate towards (y)our kids?" asks Debashish. Neel simply assumes that a woman who could scale great heights of professional success isn't the "maternal type." The scenario is all too common, unfortunately.

The lack of character development is a huge flaw. The men in Radhika's life are very poorly described, especially the first, Debashish Sen. He starts out suave, self-assured, sorted. He says all the right things.

…so says Debu when Radhika asks him about marriage!

I can readily believe in a woman who is so insecure about her attractions that she clings to the first man who shows her any attention. But Radhika does not come across as that woman at all. What she says and does shows her to be a woman who isn't afraid to say what she thinks. So what kept their relationship going for as long as it did? It's unclear what Radhika saw in him, other than that he was her 'first love'. If he's meant to be a hypocrite who pays lip service to the idea of feminism, it should have been portrayed a little better.

Then again, the dialogues are terrible. Characters who have spent most of their lives in the UK or US use Hinglish-isms such as "Don't get high hopes" and "Tell me your gut feeling." Some conversations sound like emails: "Hong Kong office is visiting the factory. Will ask them to talk to a few developers too." The conversations on feminism between characters – especially between Radhika and Brijesh – seem forced and unrealistic.

The only character whose dialogues fit her was Radhika's mother. When Radhika insists on her mom looking for 'men with some class' as potential grooms for her, she retorts, "What is this class business when you yourself are eating peanuts on the road?"

I found it particularly disappointing that a promising plot point – that of sex selective abortions – was mentioned in the book but then simply brushed aside. I think this was the biggest missed opportunity in the book. 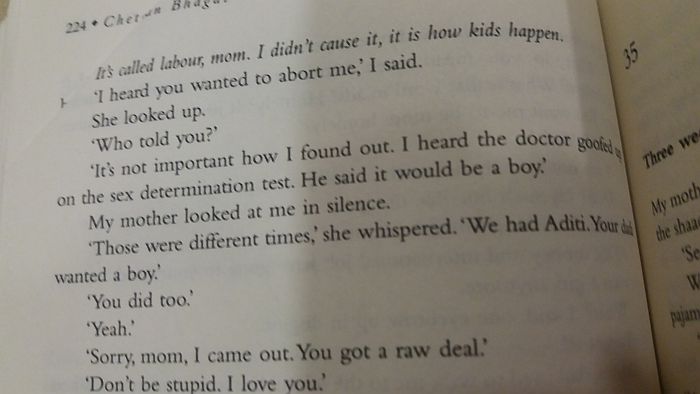 The sharpest, ugliest bit of reality in One Indian Girl

One Indian Girl isn't bad, as popular light Indian reading goes. Good storyline, intriguing characters. Keeps the reader interested. It provides quite enough food for thought if you're looking for something light to read. With better character development and a tighter plot for the affair that Radhika has with a married man, One Indian Girl could have been much better. Buy One Indian Girl Online. Did you like the One Indian Girl review? Leave us a comment!