Author Catherine Rubin Kermorgant has spent several months interacting with the temple courtesans, or devadasis, of South India. Her latest book and vigorous support of better living conditions for the devadasi community are a result of this venture. Here, we quiz her on the months she spent with these women, her take on legalizing prostitution and more.

1. Your book Servants of the Goddess: The modern day Devadasis is about women in the poorest regions of Karnataka who are in the clutches of an ancient fertility cult and forced to serve deities in temples. What drew you to this particular subject?

I studied ancient Greek civilization and Anthropology.  I was fascinated by oracles, fertility cults and Dionysian festivals.  When I heard about the devadasis cult I was naturally drawn to it.

2. In the course of your research, you interacted with the women on a personal level. How willing were they to talk about their condition to a stranger? Was your ethnic identity an asset or an obstacle? 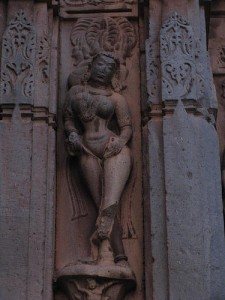 The women were puzzled by me at first.  “What does she want with us,” they asked themselves.  Only by sitting down on the ground with them and shooting the breeze did they gradually come to trust me, and once they did the floodgates opened.  They often  told me that they didn’t think a person “like me” could care about people “like them.”  It was a cathartic for them to talk about their experiences and I think by having me listen, they felt valorized.  I empathized with them and they could sense that.  I have tremendous admiration and respect for the women I met.  They have such hard lives, yet they never complain.  They put the accent on the postive aspects of life – their frienships, their families.

After the initial shock of looking at a white women in the face, race was simply not an issue.  I worked with one main interpreter, but when she was not available, I took other interpreters into the field – and I also made a film about the adivasis in the tribal region of Orissa.  All of my interpreters remarked on my ability to get adopted so thoroughly and so quickly.  I don’t know what to ascribe that to. I don’t look down my nose at people because they are nonliterate. I love listening to people and I am generally a very empathetic person.  I suppose people pick up on that and then feel at ease with me.

3. According to your book, the lives of these devadasis often resemble those of commercial sex workers and yet they continue to play a spiritual role in their villages. How do you think this dilemma is understood by the general populace? 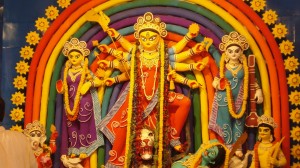 The rites of the Durga Puja in Bengal hold prostitutes sacred

What do you mean by the general populace?  Villagers in northern Karnataka or Indians in general? Devadasis today are dismissed as distasteful and uncouth. One devadasi told me “If they brush up against us during they day, they go home and take a bath, but at night they can’t wait to get their hands on us.”  They are Dalits.  But during rituals and festivals, in an extraordinary inversion of caste hierarchy, high caste men and women in the village bend down and touch their feet.  Without them, the goddess can not be properly worshipped and the rains will not come.  This is a very ancient problem. Prostitutes were always both impure and highly auspicious.  They were perceived to be a “necessary adjunct” to a “healthy society.”  This conception of the world is very much alive today – even in France.  The French government recently proposed criminalizing clients of prostitutes, and many French people were outraged.

4. This practice was outlawed by the Indian government in 1988. Are the devadasis aware of this fact? Do they welcome legal help or is it seen as an ineffective interference?

The devadasis are aware that dedication is no longer legal, but as far as I could see there was no practical application of the law whatsoever, except maybe at Saundatti Temple.  Any group of five devadasis can dedicate a girl.  How can legal assistance help devadasis?  Their only worry is getting enough food on the table so that all family members have enough to eat.  And maybe saving a little money for bad times that are sure to come.  How can legal assistance help them with that?  Micro-credit loans, vocational training and educating the young.  That will help them. 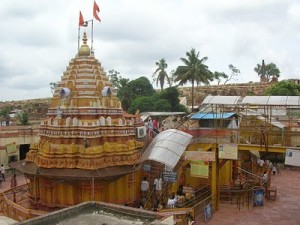 5. Did you face any threats or opposition in the course of your research?

Yes, I faced opposition, threats and a tremendously daunting amount of indifference.

6. How do you escape the trap of assuming the twenty first century version of the white man’s burden?

Kipling’s poem was interpreted in different ways by different people, so I’m not quite sure what you mean.  That paradigm is still around, but perhaps less so. As far as I’m concerned, the white man’s burden is an outdated paradigm.  We are all part of the global village now.  I went to Kalyana village; I sat with the women and ate their food.  They became my sisters and as such it is my duty to do what I can to help.  Please read my book, and if you feel there is an element of white man’s burden in it, let me know and I would be happy to explore this issue with you.  I don’t think you will find that I have a condescending or superior attitude at all – on the contrary, I have nothing but respect and admiration for devadasi women.

7. Please tell us a little bit about The Devadasi Trust that you helped establish.

Friends introduced me to Mathew Cherian while he was at the Charities Aid Foundation, and I realized how easy it would be to open an account there and have it feed into NGOs working with devadasis.  I learned so much from the devadasi women and they enriched my life tremendously.  It is a joy to finally be able to do something for them.  I do hope an American edition of the book will be released, as this will enable me raise lots of money for NGOs in Kamathipura and Karnataka….  I just finished updating the site so please take a look.

8. What is your stance on the current debate about legalising prostitution?

It’s very complex debate, which I have of course looked into, but I’m not sure I have gone deeply enough to be able to take sides at this point.  From what I understand, when prostitution is legalized, it gains a certain social sanction, and then trafficking of women and children increases in the shadows  of what is legal, whereas when prostitution is suppressed trafficking decreases.  If this is truly the case, then I would be against legal prostitution.  I want what is best for oppressed and disadvantaged women who are at risk of being trafficked.  Nevertheless, if a woman chooses to sell her body then I am not against it.  I have read about very independent, intrepid prostitutes who use internet and have ingenious ways of keeping themsleves safe and making sure men keep their side of the agreement.  Nevertheless I do not endorse prostitution.  Mind and body go together.  Selling your body takes a toll on your spirit.  Personally, I believe it is psychologically damaging.  Prostitutes often become men-haters. I think that’s why many turn to other women, and not to men, to fulfil their emotional needs.

9. As both a documentary filmmaker and a writer, which medium do you find more influential and satisfactory?

I used to think that television could be a medium for serious content – and in India, perhaps it can be, but in the States and in Europe it is increasingly just for entertainment, especially now with the advent of internet.  No one waits to learn from TV – we go to our computer screen and Google it.  In India however, where large sections of the population do not know how to read or write, perhaps TV can have a different role.    I worked with a company associated with SEWA when I was very young and they were using video as a tool to educate.  How to make a smokeless chula… they were doing wonderful work.

I find writing much more satisfactory.  No contest.  When I was making documentary films, I realized that the part I liked most about the process was the research and the writing.  Is it more influential?  As far as the message I am trying to get across, I hope so.  You’ll have to ask me in a year’s time.

10. What is next on the cards for you? Have you started work on another book yet?

Yes, I have two other books in mind, but first I want to dedicate myself to promoting this one and making sure it gets off the ground.

The concept of devadasis in Indian culture has become a symbol of many things that are wrong with our society. Read up about the recent controversy in Tamil Nadu here, and the Guardian’s analysis of the devadasi system here.